Learning points from the remission of Glioblastoma Multiforme brain tumor

Normally when I work with my cancer patients we work very intensively with five different areas of my health protocol – until we have a remission. And when we have a remission we enter a maintenance zone. The maintenance zone is when we are following the same protocol but with a little bit lesser degree of intensity. When we are working very intensively we introduce a lot of hardships in life. One must train a lot in order to reverse the condition – in order to kill cancer cells.

We need to change most of the lifestyle that caused cancer. The same routine has to be kept up every day. It takes a large degree of nudging from me, lots of teaching. It also requires a large degree of understanding the value of these principles from my patient and his or her family.

How is the process different with brain cancers?

The situation is very different when it’s brain cancer. Especially when it is one of the most aggressive brain tumors like Glioblastoma Multiforme or DIPG, because of its highly mutated DNA with a great degree of heterogeneity.

Heterogeneity means that the population of cancer cells is derived from many different DNA mutations. The higher the heterogeneity, the harder it is to target tumors with the conventional therapies. That is why Glioblastoma is called “a king tumor”.

That’s why they cannot be targeted effectively with conventional targeted therapies – because of their high heterogeneity. So we need to work with integrative therapies, multi-functional therapy in order to change the environment for all of those cancer cells and let them die or let them disappear. It’s called metabolic therapy; the therapy where we work with healing by changing the causes and not the symptoms.

Glioblastoma is different because if we reach the remission stage, we can not go into the maintenance mode with a lesser intensity. We have to work in the following years with the same high intensity. That’s why I really wanted for long time to record this video. Because Raimundas, my patient that became my friend – had Glioblastoma Multiforme. We reached remission after 2 years of battle (read more). And then after a time two new tumours appeared in other places in his brain. Now Raimundas is dead.

But his battle was not in vain. That’s why I recorded this video – 2 years after his death. Because a process like this can be better understood and assessed, insights gathered and lessons learned, after a while, after a period of time.

I want you to understand that if one battles against brain cancer or one has already reversed brain cancer –  one has to remain true to the lifestyle and the training that helped the reversal – one need to do it for the rest of one’s life. One needs to do it 100% fully – and not diminish the intensity of actions and training, because this behaviour is the saviour.

The learning points are the same – for the person who is still fighting the cancer, and for the person that survived the cancer, reversed it, and for their families. What happened For Raimundas is that after the 2 years long fight we reached remission. We were in the Copenhagen City Hospital and the neurosurgeon said that there was no tumor detectable, just scar tissue remaining. 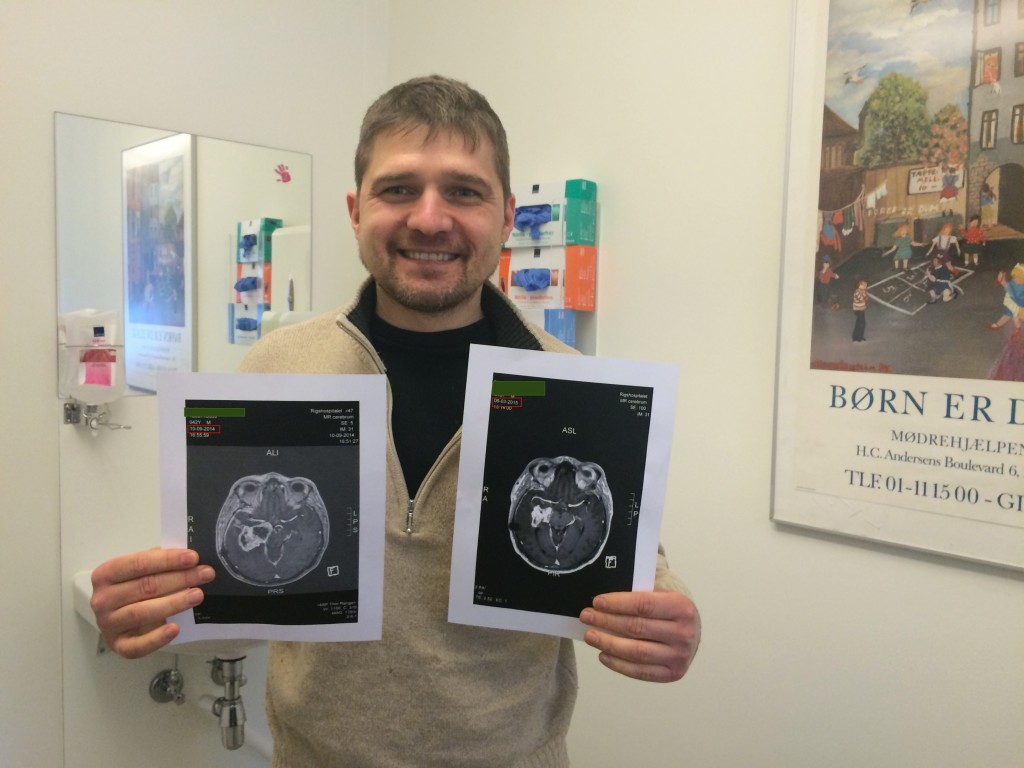 Victory after the long fight

So we were really happy and then he took a break form the strong daily regimen. And that must be my fault, that I didn’t know that after the 2-year long healing process and the victory there was no place for a break. He should have stayed on the exactly same regime in order to suppress the possible remaining cancerous cells in his brain, because one of the aspects with this very aggressive kind of cancer is that there’s no very very clear border between the cancer is population and the normal brain cells. Normal cell population merges slowly into the tumor. There will always be a risk for some cancerous mutated cells are left which we don’t want to feed. We have to remain suppressing them in the same way that we did in the period of active fighting. So – there is no maintenance period with Glioblastoma Multiforme. I didn’t know that. I felt like it was a very, very hard fight and his family that supported him 100% all the way needed a break. We had a team; me as a trainer, the patient and his family. They were exhausted. And my fault is that I didn’t know that I actually had to tell them -” You need to go on”. I needed to tell them that there was no possibility to go into maintenance with less intensity. That’s the learning point.

The long road we walked

In the process of healing of Raimundas’ terminal grade IV Glioblastoma Multiforme brain tumor we progressed a long way from the state where he couldn’t talk and he couldn’t walk,  until he was able to run, jog and enjoy life together with his girlfriend. This victory was fantastic. But then, afterwards, when he came back three months after vacation there were two new tumors. He went into depression. His family were exhausted and he was too exhausted to follow the same protocol again, to restart it. So our battle went on for a little bit more than one year until his death.

So the idea with this video is to tell you about the learning points and that it’s possible to defeat brain cancer through an integrative protocol with metabolic healing. Which means that you change the environment that let the cancer cells die off. So the normal function of the brain is reestablished. There is phenomenon called neuroplasticity on the different levels and our body’s ability to heal is fantastic. And we can nudge people on the way to healing by giving information and giving very very practical training regimens and supporting the process.

The therapeutic regimen has to be drastic in order to eliminate the circumstances where the cancer can not be triggered again. The regimen has to be followed rigidly during the rest of your life. This will make it physiologically impossible to have the recurrence of disease through the same stress factors that have caused the disease initially. In the case of brain tumors this is even more important as the secondary tumours are even more aggressive. We need to eliminate ALL the triggers to ensure that cancer never comes back. Brain tumor survival rate can be raised substantially through metabolic therapies.

The therapeutic regimen has to be drastic in order to eliminate the circumstances where the cancer can not be triggered again. The regimen has to be followed rigidly during the rest of your life. This will make it physiologically impossible to have the recurrence of disease through the same stress factors that have caused the disease initially. In the case of brain tumors this is even more important as the secondary tumours are even more aggressive. We need to eliminate ALL the triggers to ensure that cancer never comes back. We can raise brain tumor survival rate substantially by using metabolic therapies. 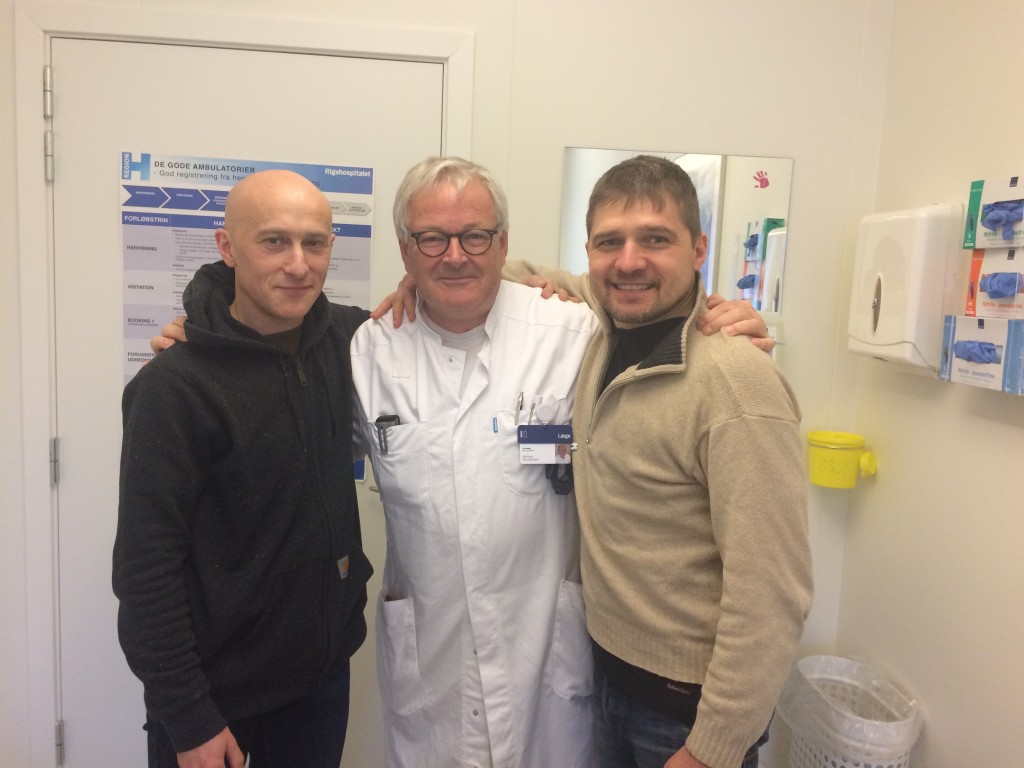 Do you have questions or comments?

Please write to me in the COMMENTS field below and I’ll do my best to answer right away.
If you need a short 15-min private session with me please book your FREE online 1:1 here.

How to Heal Cancer Naturally with Sleep Hacking