How do I use Sakharoff Protocol to work with Alzheimers, Parkinsons and other neurodegenerative diseases?

Neurodegenerative Diseases seen with the eyes of an engineer

I look at Neurodegenerative Diseases with the eyes of an engineer. For me it’s about a number of different degenerative changes in the brain’s nerve cells. These changes are conditioned both by personal genetic setup as well as by some aspects of lifestyle and environment that can trigger this genetic setup – or not. This is called epi-genetics.

Why do the cells degenerate?

The degenerative changes in the brain cells emerge and develop in general through the following:

All these aspects apply generally to all kinds of dementias.

We work with the causes – not with the symptoms

I do not work with the symptoms, but with the causes of every illness or condition – until the symptoms gradually disappear.
The main areas of work with neurodegenerative diseases are:

Antioxidant effects – A significant proportion of the neurological deficits that occur following stroke, head trauma, anoxia or even in Alzheimer’s disease can in fact be attributed to secondary injury caused by glutamate excitotoxicity and, consequently, intracellular calcium overload, mitochondrial dysfunction and oxidative stress. Calorie restriction delays age-related oxidative damage to DNA, proteins and lipids as evidenced by decreased tissue concentrations of peroxidised lipids, protein carbonyls and damaged bases in nuclear and mitochondrial DNA.

Increased metabolic efficiency – Slowing of brain aging in calorie-restricted animals was originally believed to result from reduced metabolic activity and, hence, decreased production of reactive oxygen species, a natural byproduct of oxidative metabolism. Calorie restriction promotes mitochondrial biogenesis, thereby enhancing total metabolic output per cell while decreasing mitochondrial production of reactive oxygen species. Calorie restriction prevents the age-related decline in oxidative metabolism in muscle. The neuroprotective benefits of this increased metabolic efficiency have not been directly investigated but would be expected to increase neuronal resistance to injury given that mitochondrial damage and energy failure are central components of many neurological disorders.

Increased sirtuin activity – Sirtuins are a large and diverse family of enzymes that regulate gene expression. In mammals, calorie restriction increases the expression of Sirt1, the Sir2 mammalian ortholog, in various tissues, including brain. Moreover, several lines of evidence suggest that Sirt1 activation is neuroprotective. Sirt1 decreased amyloid Aβ accumulation in brains of mice (a model of Alzheimer’s disease) and aged Squirrel monkeys by enhancing α-secretase processing of the amyloid precursor protein.

Increased protein chaperone activity – Chaperones are highly conserved, ubiquitous proteins that prevent misfolding and aggregation of polypeptides (Amyloid Beta) into potentially toxic compounds. Aberrant folding leading to the formation of insoluble aggregates has been implicated in the pathogenesis of several neurodegenerative disorders, including Alzheimer’s, Parkinson’s and Huntington’s diseases. Chaperones have been shown to protect neurons in rodent and drosophila models of both acute and chronic neurological disorders.

Anti-inflammatory effects – Aging and various neurological disorders are characterized by increased levels of several inflammatory mediators. NFκB activation is central component of this inflammatory process. NKκB activation can be triggered by several sources of injury such as reactive oxygen or nitrogen species or amyloid Aβ and causes enhanced transcription of interleukins (IL1β, IL2, IL4, IL6), tumor necrosis factors (TNFα and TNFβ) and the pro-inflammatory enzymes cyclooxygenase-2 (COX-2) and inducible nitric oxide synthase (iNOS) in various tissues, including the brain. Calorie restriction reduced NFκB levels (probably a Sirt1-dependent process), blocked the synthesis of interleukins and TNFα and suppressed the activity of COX-2 and iNOS in animal models and in humans with Alzheimer’s disease, administration of medium-chain triglycerides improved memory and the degree of improvement correlated with blood levels of β-hydroxybutyrate. Further, direct application of β-hydroxybutyrate protected cultured hippocampal neurons against Aβ toxicity. Similarly, oral intake of a ketogenic medium-chain triglyceride diet improved cognitive function in patients with Alzheimer’s disease.

Enhanced neurogenesis – Neurogenesis persists in several regions of the adult brain, including the dentate gyrus, a critical region for cognition, but progressively decreases with age. Newly generated neurons in the hippocampus might play a part in learning and memory but the functions of neural stem cells remain largely unknown. Calorie restriction promotes neurogenesis in adult rodents, probably by increasing BNDF levels

Prevention and Reversal of Alzheimer’s Disease, 2017.
Management and reversal of cognitive decline in AD is defined by effectiveness of external factors that have been identified, addressed, and eliminated. Our goal is to identify as many of these external factors as possible. Towards that end, we have developed a novel information technology approach that selects those biomedical literature articles identifying potential AD/dementia foundational contributing factors. The approach is based on the following holistic medical principle: At the present time, removal of cause is a necessary, but not necessarily sufficient, condition for restorative treatment to be effective. 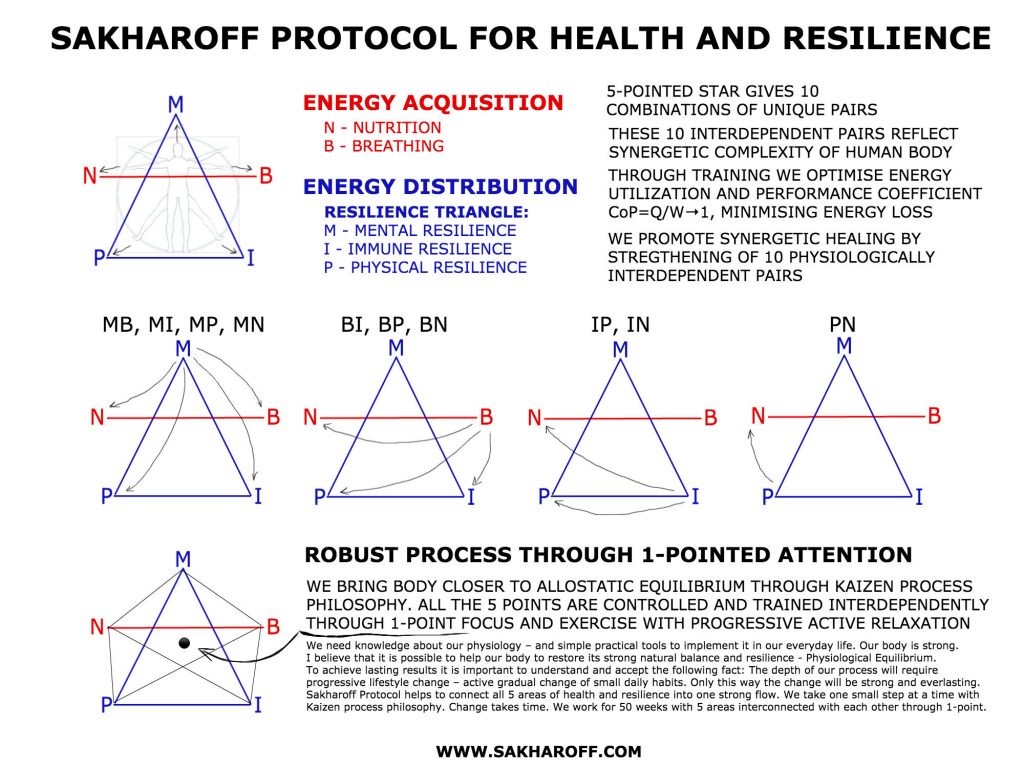 Impact of Sleep-Disordered Breathing on the Risk of Cognitive Decline and Dementia, 2015. BI
Recent studies provide further support for sleep disturbance as a potential cause of cognitive decline, dementia, and AD pathology. As evidence for poor sleep as an AD risk factor grows, educating clinicians about this and the importance of safely promoting healthy sleep may play a useful role in AD prevention.While we focused on sleep as a contributor to AD, poor sleep and AD pathology likely share a synergistic relationship: poor sleep may facilitate Aβ deposition, which in turn worsens sleep, and so on. Cross-sectional study of 142 cognitively normal middle-aged and older adults, that those with a lower level of cerebrospinal fluid (CSF) indicating greater Aβ burden. SDB and sleep loss both are associated with increases in inflammation, which is itself associated with cognitive decline and thought to contribute to AD pathology. Inflammation may mediate associations between sleep disturbance and both cognitive decline and AD biomarkers.

Voluntary Exercise Decreases Amyloid Load in a Transgenic Model of Alzheimer’s Disease, 2005.
Alzheimers disease (AD) is a progressive neurodegenerative disorder for which there are few therapeutics that affect the underlying disease mechanism. Recent epidemiological studies, however, suggest that lifestyle changes may slow the onset/progression of AD. We examine directly the interaction between exercise and the AD. Our findings demonstrate that voluntary exercise can decrease significantly Aβ load in the model of AD. Whereas pharmacological interventions have sought to reduce Aβ to constrain the AD cascade, we demonstrate here that exercise represents a simple behavioral strategy that may promote a resistance to the development of the neuropathology of AD. These findings provide the first support of existing epidemiological data and warrant additional studies to delineate both the intensity/timing of the exercise required to impact significantly the progression of the disease and the mechanism responsible for the decreased Aβ levels. Future studies also will allow us to assess the effect of exercise in other transgenic models of AD.MN

MN- Role of Nutrition and Hygiene in stopping Cognitive decline

Vitamin D and the risk of dementia and Alzheimer disease, 2014.
Our results confirm that vitamin D deficiency is associated with a substantially increased risk of all-cause dementia and Alzheimer disease. This adds to the ongoing debate about the role of vitamin D in nonskeletal conditions. Our findings support the hypothesis that vitamin D may be neuroprotective. This information is likely to prove useful in improving the design and reducing the cost of randomized controlled trials investigating whether vitamin D supplements can be used to delay or prevent the onset of dementia and AD in older adults.

The role of magnesium deficiency and an hypothesis concerning the pathogenesis of Alzheimer’s disease, 1990.
Evidence is presented indicating that dementias are associated with a relative insufficiency of Magnesium (Mg) in the brain. Such insufficiency may be attributable to low intake or retention of Mg; high intake of a neurotoxic metal, such as aluminum (Al), which inhibits activity of Mg-requiring enzymes

Intermittent fasting ameliorate age-related behavioral deficits in Alzheimer’s disease, 2007, Laboratory of Neurosciences, National Institute on Aging, Baltimore.
Intermittent Fasting (IF) may protect neurons against adverse effects of A-beta and tau pathologies on synaptic function. We conclude that CR and IF dietary regimens can ameliorate age-related deficits in cognitive function by mechanisms that may or may not be related to Abeta and tau pathologies.

The Ketogenic Diet as a Treatment Paradigm for Diverse Neurological Disorders, 2012.
There is now compelling evidence that The Ketogenic Diet’s efficacy is likely related to the normalization of aberrant energy metabolism. We provide an overview of studies using the KD in a wide panoply of neurologic disorders in which neuroprotection is an essential component. This review article explores the rationale for using the KD and related dietary treatments in neurological disorders.

Inflammation in Alzheimer Disease, 2012.
Biochemical and neuropathological studies of brains from individuals with Alzheimer disease (AD) provide clear evidence for an activation of inflammatory pathways, and long-term use of anti-inflammatory drugs is linked with reduced risk to develop the disease. As cause and effect relationships between inflammation and AD are being worked out, there is a realization that some components of this complex molecular and cellular machinery are most likely promoting pathological processes leading to AD, whereas other components serve to do the opposite. The challenge will be to find ways of fine tuning inflammation to delay, prevent, or treat AD.

Anti-inflammatory mechanism of ketogenic diet and fasting, 2015.
It is well known that fasting and calorie restriction reduces inflammation in the body. This study reveals the mechanism of immune cells adaptation to reduced availability of glucose. The study proved that the inflammation was reduced with ketogenic diet, which elevates ketone levels in the bloodstream produced from fat oxidation.