Read about Kris’s life-giving journey towards new energy – away from the post-viral chronic fatigue and chaos with NPMA – Non-Pharmacological Metabolic Approach!! 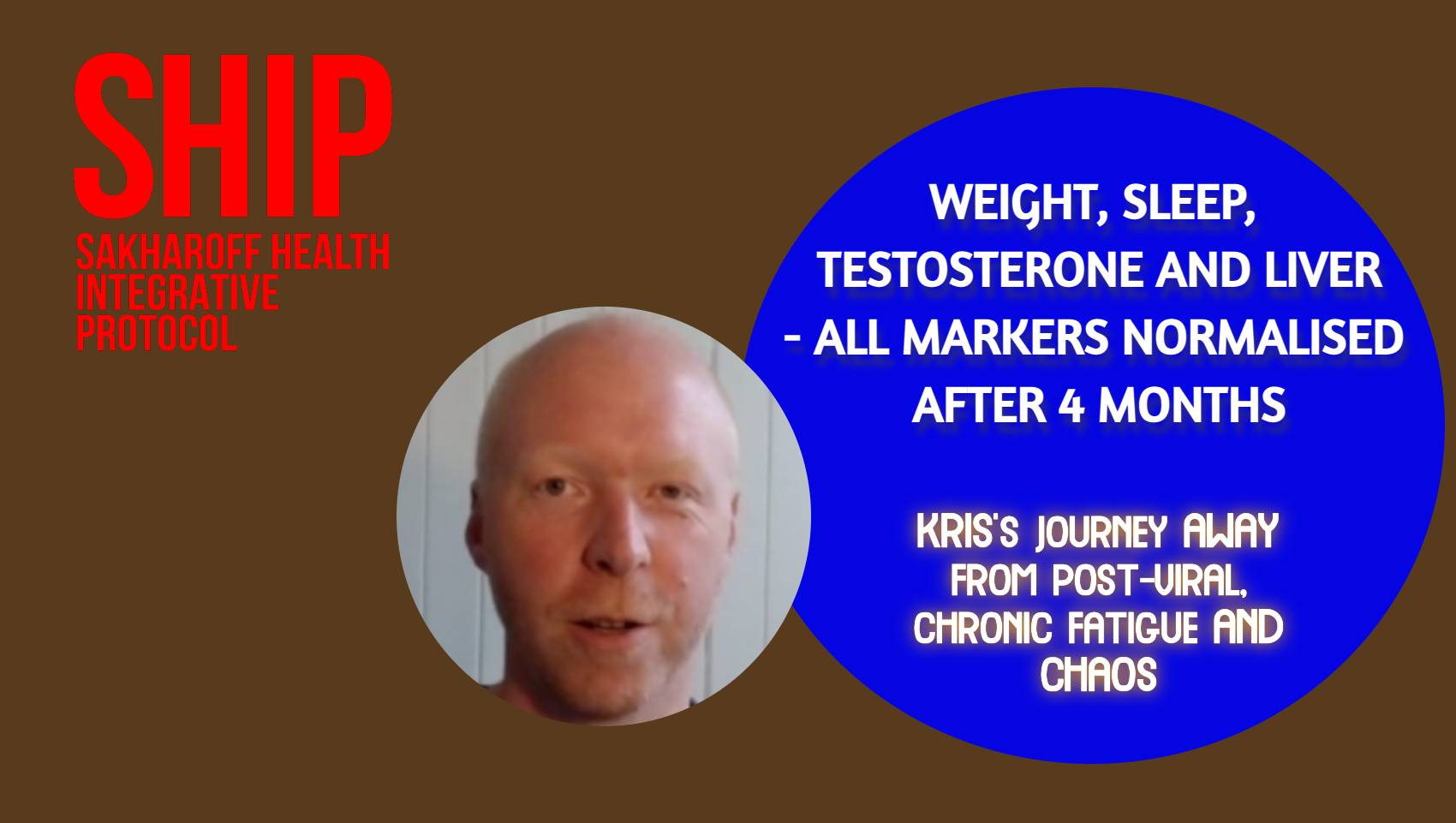 Weight, sleep, testosterone and liver - all markers normalised after 4 months!

When 43 yo Kris from Norway started my Metabolic program, he had diagnosis Post-Viral Chronic Fatigue. But he decided to take matters into my own hands.

His transformation story could be very inspiring for many!

At the beginning of the program:
“In 2017, I contracted pneumonia, which did not go unnoticed. After that, in April-May 2018, I was diagnosed with post-viral, chronic fatigue. One of the many verdicts for this diagnosis was the conclusion that there is no medical cure for this condition in the world. There is also a lot of disagreement about what to do about it. In fact, complete chaos.

So I decided to take matters into my own hands and began trying a whole series of alternative therapies that were more or less proven or worked in clinical trials. As part of this process, I have tried everything from functional medicine to mental practices to the carnivore diet.

I tried to practice the method of Professor Buteyko, and even got the first positive results, but after a while the result came to naught, and I again came back to the fact that there was no trace of health.

I found Misha because I was searching on Google for information on chronic fatigue, and I accidentally discovered the Buteyko method on Misha's website. At that moment he did not have a program where one could work with him. I was aware of and inspired by the results and tried some elements that I could read on the site. However, my practice at that time was short-lived in order to get the clear and lasting results that I wanted to achieve. As soon as the opportunity to register for the program appeared, it was not a question for me, I knew that I wanted to work with this person. I knew about all the real cases, how he helped people recover from inoperable cancer. And I have also worked with some of his colleagues who are very respectful of him and his results.

The program was very easy to get started. Everything step by step. There is a lot, a lot of support, both in terms of answering questions and with motivational content. This is an amazing group of contributors with a lot of knowledge and resources. Every week there is a SHIP Circle for participants, there are also Q&A broadcasts, which are very supportive. "

After 4 months on the program:
“My weight returned to the level it was at the age of 20 and stabilized.

I did a complete blood count three months later on the program:

- All my indicators of the state of the liver decreased by half - to the norm. Before that, my doctor and I had been fighting them for two years - without much change.

My testosterone was previously low for my gender and age group. This is the indicator that greatly affects the level of total energy. And he also bounced back.

My control pause, which is a marker of the Buteyko breathing method and at the same time a general marker of the state of health, has doubled during this time. And this is after during the year before the program, despite the daily independent practice of breathing according to Buteyko, I remained at the same level of the control pause. It's incredible - but it really is.

I began to withstand much more active load without side symptoms. This means that instead of focusing on maintaining the same level, now I can begin to increase activity, increase physical activity and begin the rehabilitation process.

Another result is sleep. And this result is very important. Before I could wake up more tired than before going to bed. I had this condition for at least two - two and a half years. And sleep was one of the first moments that returned to normal with the beginning of the program. And now, when I sleep, I actually recover and feel a little better when I get up than when I go to bed the night before. If there is a critical aspect of lifestyle that is critical to me, it is definitely improving the quality of sleep.

Now I can manage my life, and I would not even have thought a few months ago that this is possible."

On our program we have a whole lot of experience working with people having CFS/ME Chronic Fatigue Syndrome diagnosis - both men and women. Experiencing progress in metabolic changes with breathing normalisation, blood glucose measurement and inflammation markers we slowly remove out crutches phasing out medications and supplements - relying on resurrection of the innate abilities to self-regulate by the body itself. Our SHIP Metabolic Health program is a NPMA - Non-Pharmacological Metabolic Approach.

If you would like the same results as Kris I would recommend you to consider joining our Metabolic Health program!

DID YOU TAKE A DECISION TO CHANGE YOUR OWN LIFE?

Are you seriously considering joining the program - but still have some doubts that need clarification? Get your no-obligation 20-minute health strategy consultation
with Misha Sakharoff usually worth 175$ for free