Help your clients with The Sakharoff Protocol

to change the cell environment and stop the metabolic syndrome

- Instead of only fighting the symptoms with targeted therapies

We are starting an online program for practitioners:

Are you a health professional
eager to connect the dots?

Subscribe to our information letter and learn more
about our practitioner education: 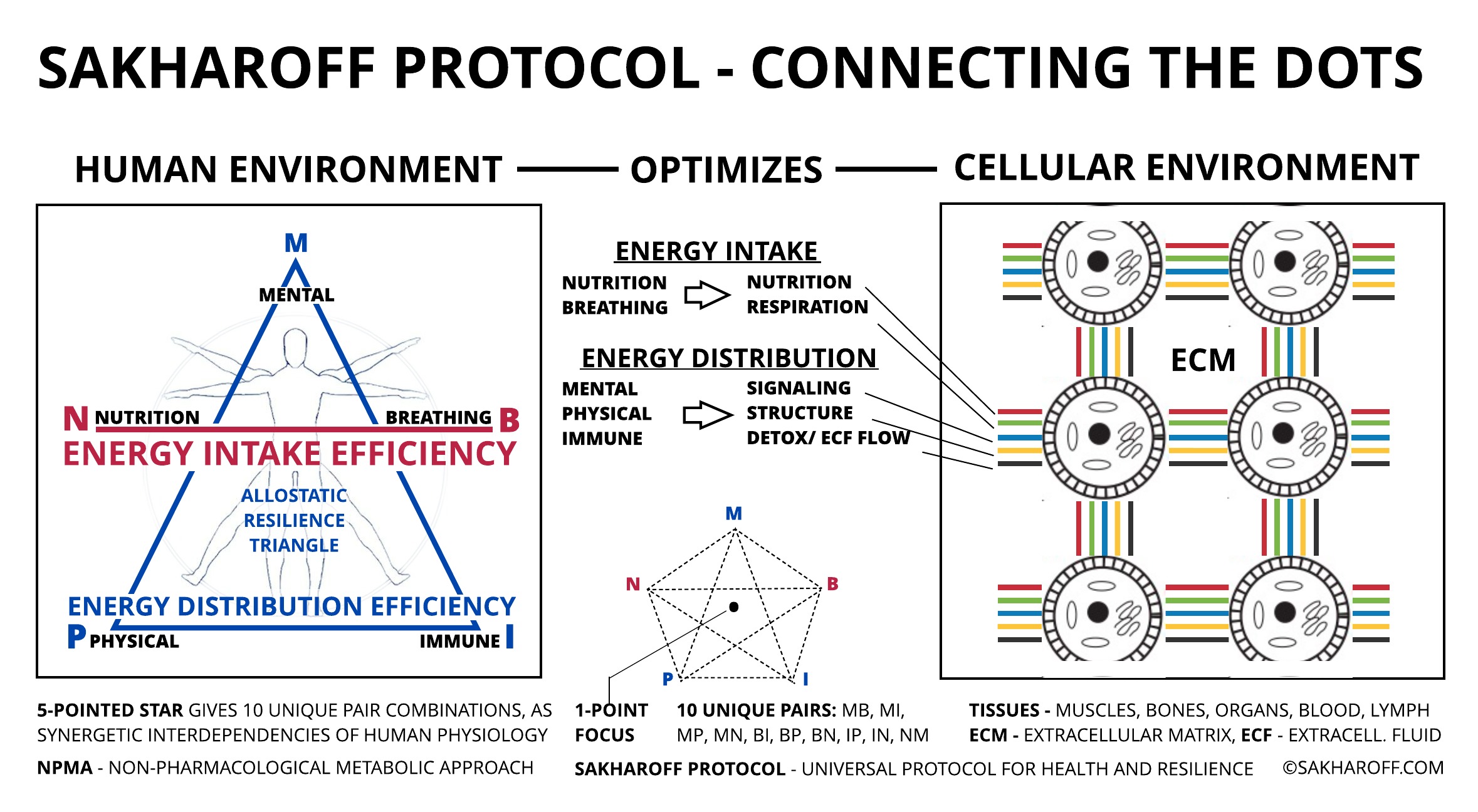 Sakharoff Protocol - How It Works

These 5 main areas of practical training create a strong synergetic effect when combined together into one structured process and can be divided into two groups, as follows:

Energy acquisition from the environment can be optimized through fields of breathing and nutrition. Energy intake can be subdivided into two main areas of practical training and lifestyle change as follows:

Effective transition to therapeutic nutrition through cancer-fighting and immune-boosting nutritional regimen. This dietary regimen will shift brain cells to full range fat burning and independency from glucose. That will drastically lower body glucose under the levels that stop chronic inflammation - which correlates with cancer proliferation and metastatic activity.

At the same time this regimen will ensure full elimination of all possible foods that can trigger autoimmunity and inflammation.

Optimization of nutrition has a direct effect on digestion of nutrients through the digestive system and absorption by the cell. Tools used in Sakharoff Protocol combine restricted ketogenic diet (CRKD) with a strict elimination protocol to avoid the main dietary triggers of autoinflammation. It also involves fasting regimens - both intermittent fasting (IF) and extended water fasts (2–5 days) [11].

The whole BEAT DIPG Intensive Bootcamp framework is targeted on the novel metabolic markers that are known to stop brain tumors - instead of traditional gene-specific tumor markers.

The progress is measured through clearly defined measurement targets metabolic markers. G/K ratio is one of the novel metabolic markers, which is a ratio of blood glucose to blood ketones. It is defined in the experimental metabolic approach for brain tumors by Prof. Thomas Seyfried from Boston College Biology Department [12]. According to the scientific research and several case studies it showed clear correlation with diminished inflammation markers in the brain tumors and regression and remission of the tumor.

Optimization of cellular oxygenation with Buteyko breathing normalization technique (BBT). It slowly normalizes cell metabolism and stop inflammation through optimization of breathing patterns. It activates the body’s natural production of hormones and chemical substances. Same chemicals used by the pharmaceutical industry in the production of modern medicinal drugs.

Optimization of breathing has a direct effect on mitochondrial respiration. Tools used in Sakharoff Protocol to optimize automatic breathing patterns combine BBT with breathing devices mentioned previously in this chapter.

The progress is measured through clearly defined measurement targets metabolic markers. Control Pause (CP) is one of the novel metabolic markers, that reflects the normality of the regulation of gas balance in the lungs, as well as the blood and body pH and thus reflects the level of disease. The CP can be measured with a stopwatch as a timing of involuntary reflexive muscle contractions - as a reaction to an unforced breath-holding. The founder of Buteyko Breathing optimization Technique (BBT) Dr. Konstantin Buteyko stated that the measurement target of 60 seconds correlates with the cell environment that is uninhabitable for cancerous tumor cells - while making the normal cells thrive [13,14]. This is especially useful for inoperable intrinsic, diffuse and multiforme tumors as DIPG and GBM. People diagnosed with brain tumors often have a CP of 5-10 seconds.

Energy distribution and utilization by the body can be optimized through training of allostatic resilience to minimize energy loss—the difference between acquired and utilized energy. The effectiveness and allostatic resilience can be viewed as the ratio of Q (energy output) to W (energy input), called performance coefficient (CoP) [15].

Resilience in general affects ability to return to high utility state following perturbations [16]. It is hypothesized that resilience in humans can be enhanced through training of its three parts—mental, physical, and immune. In Sakharoff Protocol this is called “allostatic resilience triangle”.

- Mental resilience
In the human environment, mental resilience is a part of allostatic resilience that reflects the ability of the body to withstand psychological stressors and adapt to life tasks, maintaining normal hormonal balance and neuroendocrine signaling [17]. To optimize mental resilience, Sakharoff Protocol uses training of relaxation patterns through progressive active relaxation in combination with training of 1-pointed attention.

In the cellular environment, this resilience corresponds to the ability by the cell environment (ECM - ExtraCellular Matrix) to maintain proper signaling function by the cell.

In the human environment, physical resilience is a part of allostatic resilience that reflects the ability of the body to withstand, adapt, and recover from physical load and stressors. To optimize physical resilience, Sakharoff Protocol uses multipurpose training inspired by Dharma-Marga and Tibetan yoga, forefoot walking, jogging, bodyweight exercise, rebounder bouncing, as well as kettlebell training.

Building up the vital immune system through structured daily exercise, activating the cascading effect of venous and lymphatic valve/ pump functions, starting from the plantar venous lymph pump in the feet and all the way upwards to the heart.

Paying special attention to sleep optimisation for eliminating toxins from your body by cleansing/detoxing, restoring, and protecting the body cells on a daily basis, including the three pathways of cellular autophagy [19].

In the human environment, immune resilience is a part of allostatic resilience that reflects the ability of the body to withstand, adapt, and recover from opportunistic organisms and pathogens as bacteria, viruses, fungi, or protozoa. Among techniques used in Sakharoff Protocol to optimize immune resilience are forefoot walking/ jogging, 3D multipurpose exercise to promote in-movement lymph drain, as well as different types of cold exposure.

In the cellular environment, this resilience corresponds to the ability by the ECM to maintain proper flow, viscosity, and composition of extracellular fluid (ECF) as well as blood and plasma. 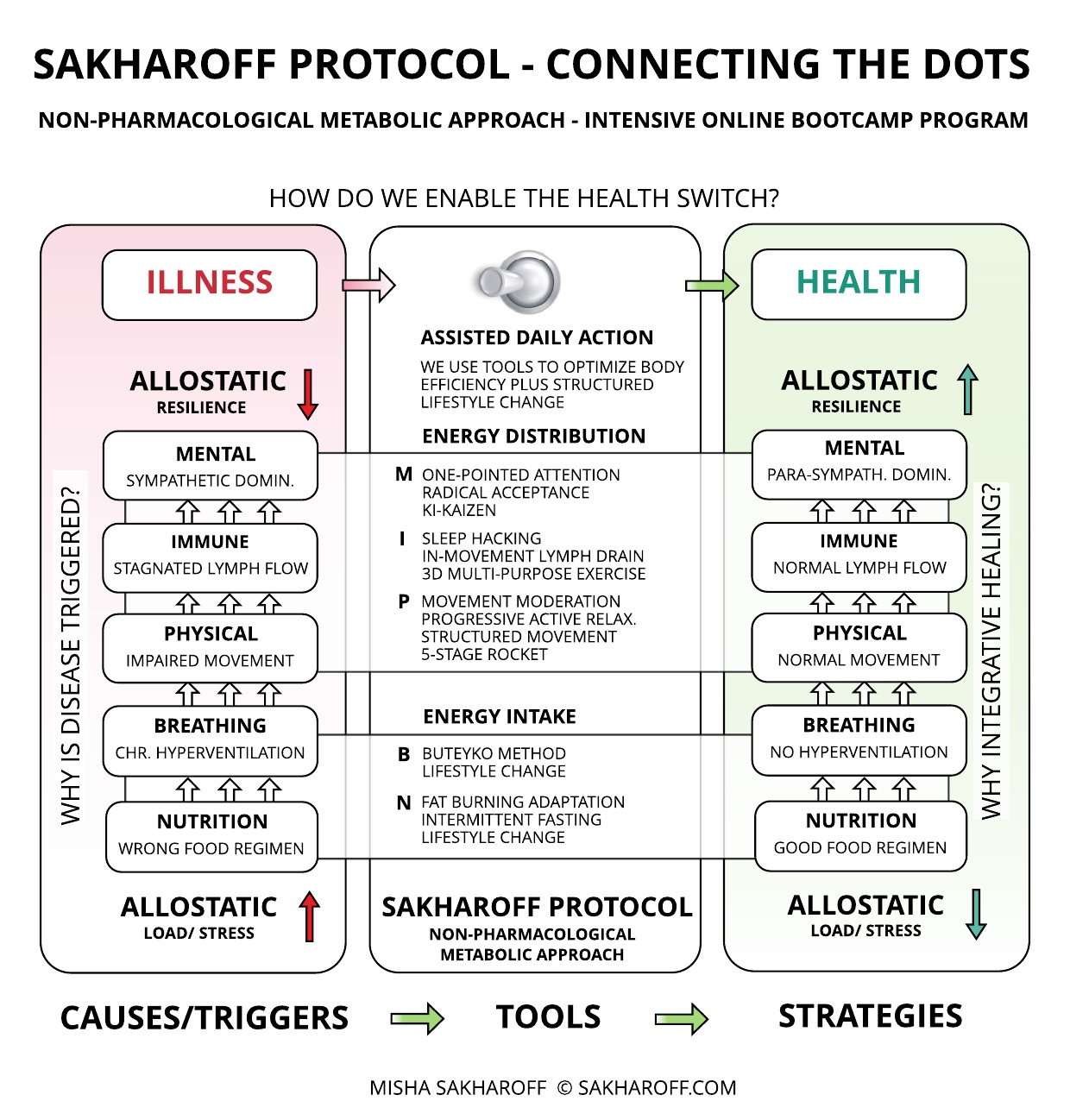 Message for You From
The  Sakharoff Team

The message that serious illnesses can be reversed without medication, but with lifestyle change and exercise, typically produces 2 types of personal reactions. In some people, it evokes emotion and arouses rejection and disapproval, while in other it triggers curiosity. Both types of people need information about integrative approaches to healing based on modern medical research on human metabolism and chronic diseases. That is exactly the niche we fill in as a business. We believe in "Education instead of Medication".

It is a slow process, but it's the only way we can get our citizens to take responsibility for their health in their own hands. It is the only way we can stop epidemic-like growth of the major chronic lifestyle diseases, such as heart disease, cancer and dementia. The diseases that, according to economists, are likely to overthrow our state budgets in the near future.

Our program is based on the latest 10 years of research in reversing brain tumors, neurodegenerative diseases like Alzheimer's and other lifestyle diseases through lifestyle change, training and daily process support. We work with the same aspects as the most significant and successful medical studies on the relationship between metabolism and dementia.

Can we afford to wait?

Or should we start saving the newly diagnosed already today?

Are you a health professional
eager to connect the dots?

Subscribe to our information letter and learn more
about our practitioner education:

Get Info About The Sakharoff Protocol Practitioner Courses